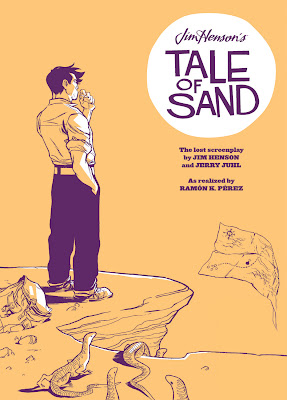 From Amazon: "Join us as we explore this missing piece of Jim Henson's career in a celebration of his creative process. Discovered in the Archives of the The Jim Henson Company, A Tale of Sand is an original graphic novel adaptation of an unproduced, feature-length screenplay written by Jim Henson and his frequent writing partner, Jerry Juhl. A Tale of Sand follows scruffy everyman, Mac, who wakes up in an unfamiliar town, and is chased across the desert of the American Southwest by all manners of man and beast of unimaginable proportions. Produced with the complete blessing of Lisa Henson, A Tale of Sand will allow Henson fans to recognize some of the inspirations and set pieces that appeared in later Henson Company productions."

I'm not a big enough Jim Henson fan to have recognized set pieces, and I'm not a huge fan of graphic novels, but I really enjoyed the style of this book. The art work is fantastic (but: warning for the younger/sensitive crowd, there is a little nudity). It's well-drawn, and colorful, but it's also unique in the way it incorporates the (apparently) actual screenplay pages into some of the backgrounds, like a little reminder every once in a while what the whole thing is based on. The story is imaginative and surreal, but I can see why it wasn't ever made into a movie.  It seems more like something that would make a great short story, not a full-length film.  As serious as the topic of the story could be taken, it did make me laugh out loud a couple of times.

It was not what I expected from a Jim Henson story, and I appreciated it even more for that.  If you're a fan of Jim Henson, you really should read this book.
Posted by Shannon Mawhiney at 7:13 PM No comments: