Book Review: Life as We Knew It by Susan Beth Pfeffer 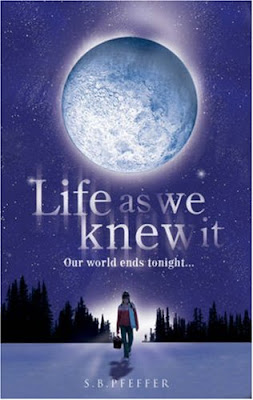 From Amazon:
"Miranda’s disbelief turns to fear in a split second when a meteor knocks the moon closer to the earth. How should her family prepare for the future when worldwide tsunamis wipe out the coasts, earthquakes rock the continents, and volcanic ash blocks out the sun? As summer turns to Arctic winter, Miranda, her two brothers, and their mother retreat to the unexpected safe haven of their sunroom, where they subsist on stockpiled food and limited water in the warmth of a wood-burning stove.
"Told in journal entries, this is the heart-pounding story of Miranda’s struggle to hold on to the most important resource of all--hope--in an increasingly desperate and unfamiliar world."

I finished this book in only a few nights, which is becoming an increasingly rare thing for me, so I have to give the book credit for being engaging and interesting enough to hold my attention and make me want to finish it.

The only problem is that by the end I was disappointed, and for several reasons.  I understand now that this book is part of a 3-book series, but that only the last book continues this book's story.  However, I still felt let down that this book does not tell us what happens to many important characters.  They just up and leave, and that's it.  Part of what kept me reading was wondering what happened to these people, and then, poof; it's over.

Characterization was a bit of a problem also.  I could cut it a little slack since it's told from the perspective of a 16-year-old's journal, but I still wish I'd gotten a better "feel" for all of the major players, Miranda included.  They just never quite felt entirely real.

And then there's the stuff that the author just didn't bother to research that got irritating.  Apparently most of the science (about the moon, the weather, etc.) doesn't add up; but to be honest, I wouldn't have known if I hadn't read others' reviews.  But the well kept working without electricity?  They tossed their hair clippings into the fire to "watch them sizzle" but don't mention the horrible stench that would've caused?  The wood stove that they're sleeping in front of backfired and they woke up from the smoke, not the *boom*?  The mayor has a snowmobile, that he could have used to go find and talk to people, but simply wonders out loud why no one's coming for supplies?  These are all pretty big errors, and I'm surprised they made it past an editor, let alone the author herself.

Also, as much as I could be called a "crazy liberal," the jabs at George W. Bush and Fox News were a little much. The crazy Christians didn't bother me as much, but I would've liked to see some realistically reasonable Christians as well.  It's pretty far-fetched to think the only Christians Miranda comes into contact with are in a cult.

And that's why, as much as I honestly enjoyed the read, I can't rate it any higher than a 3.
Posted by Shannon Mawhiney at 8:54 PM No comments:

Email ThisBlogThis!Share to TwitterShare to FacebookShare to Pinterest
Labels: Book reviews, Life as We Knew It, Reviews, Susan Beth Pfeffer 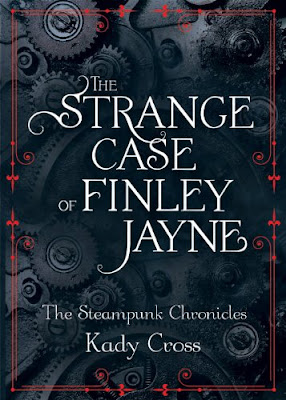 From Amazon: "Finley Jayne knows she's not 'normal'. Normal girls don't lose time, or have something inside them that makes them capable of remarkably violent things. Her behavior has already cost her one job, so when she's offered the lofty position of companion to Phoebe, a debutante recently engaged to Lord Vincent, she accepts, despite having no experience. Lord Vincent is a man of science with his automatons and inventions, but Finley is suspicious of his motives where Phoebe is concerned. She will do anything to protect her new friend, but what she discovers is even more monstrous than anything she could have imagined…"

This is actually a short-story prequel to the series' first book, The Girl in the Steel Corset, which I have not read.  This prequel is also currently free on Kindle.

Overall, this wouldn't be bad for a reader probably in the junior high age range.  It gets a little tiring though when Finley Jayne never seems to grow into more than a Mary Sue.  Keep in mind, this judgment is based solely on the short story; maybe Finley is better developed in the novels.  And the story as a whole isn't terrible, especially since the author clearly knows very well the world she's created.  But I never cared for Finley's constant haranguing herself for doing good things that she had somehow determined were part of her "bad side," and so I have no real interest in reading the series.
Posted by Shannon Mawhiney at 12:40 PM No comments: