Book Review: Out of My Mind by Sharon M. Draper 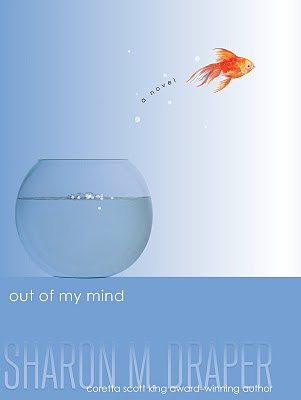 From Amazon.com: "Melody is not like most people. She cannot walk or talk, but she has a photographic memory; she can remember every detail of everything she has ever experienced. She is smarter than most of the adults who try to diagnose her and smarter than her classmates in her integrated classroom—the very same classmates who dismiss her as mentally challenged, because she cannot tell them otherwise. But Melody refuses to be defined by cerebral palsy. And she’s determined to let everyone know it…somehow."

I wanted to like this book so badly. It has such a good premise and would have been such a unique story, had it been told realistically.

My disclaimer here though is that I didn't finish the book.  I got as far as the extremely forced argument between Melody's mother and the terrible teacher who would only teach Melody's class the alphabet, and I gave up. I hate to give up on books, and I don't often do it, but I could not take this book seriously. The argument between the mother and teacher sounded like dialogue from a children's board book. Some of the descriptions are great, and I loved how the book opened. But Melody very rarely sounded like a child, (more like an adult speaking for a child); all other characters seemed like stock characters rather than people; dialogue was very stilted and forced; and there were plot holes everywhere. What especially had me scratching my head was Melody's constant talk of how she can't communicate... and then we find out that she has a very complex word board (thanks to a neighbor/babysitter, not her advocate mother who yells at everyone, telling them she knows how incredibly smart Melody is?) but for some reason doesn't really use it.  I just don't get it.  And seriously, Melody got through 6 months of this awful teacher, and her mother and father, who love Melody and pay so much attention to her, never asked her how school was going? Or they did and Melody wouldn't use her board to tell them? What?

I could possibly see this book still being good for kids, as an introduction to understanding people with disabilities. But even then, I think you could find something much better.
Posted by Shannon Mawhiney at 8:36 PM No comments:

Email ThisBlogThis!Share to TwitterShare to FacebookShare to Pinterest
Labels: Book reviews, Out of My Mind, Reviews, Sharon M. Draper 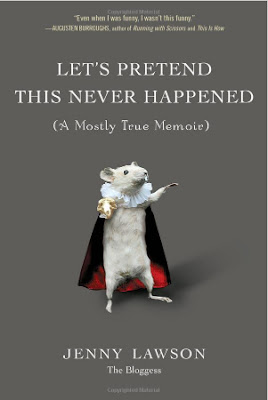 From Amazon: "Jenny Lawson realized that the most mortifying moments of our lives—the ones we’d like to pretend never happened—are in fact the ones that define us. In Let’s Pretend This Never Happened, Lawson takes readers on a hilarious journey recalling her bizarre upbringing in rural Texas, her devastatingly awkward high school years, and her relationship with her long-suffering husband, Victor. Chapters include: “Stanley the Magical, Talking Squirrel”; “A Series of Angry Post-It Notes to My Husband”; “My Vagina Is Fine. Thanks for Asking”; “And Then I Snuck a Dead Cuban Alligator on an Airplane.” Pictures with captions (no one would believe these things without proof) accompany the text."

Jenny Lawson is also known as The Bloggess  and, as the moniker implies, writes a blog (TheBloggess.com), which is not safe for work, not safe for children, and not safe for anyone even remotely prudish. But she is hilarious. On that note though, I definitely wouldn't recommend this book for anyone who isn't already a fan of her blog. Not in a "you just aren't part of the cool kids club" way, just a "you need to already be a fan who's accustomed to her somewhat-disjunctive, possibly-offensive style of writing to enjoy the book" way.

I love Jenny's blog, and I really liked this book, but I thought I would instantly love it, and I didn't entirely. I loved parts of it, but I didn't care for the constant italicizing (which works perfectly in the blog, but not in a book), and at least one of the chapters seemed to be word-for-word from a blog entry. Which was a little off-putting, since the vast majority of those reading the book are going to be her blog fans. But anyway, if you enjoy her blog, then you will definitely enjoy this book. She has a way of making even the most awful situations funny, and she is open and honest about some very tough subjects, which is always great to read, even if you haven't been through the situations yourself.
Posted by Shannon Mawhiney at 5:00 PM No comments: 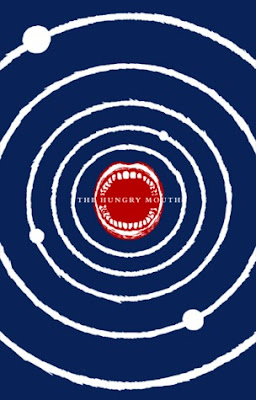 From Goodreads.com: "A man and a woman on their first date discover they have amazing powers.

"A Tyrannosaurus Rex enjoys modern life as the guardian and spiritual mentor of Seattle.

"An angry stoplight manages traffic for the lawless humans it despises.

"An immortal and indestructible man discovers the horror and beauty of living forever.

"A serpent exchanges emails with government agencies, confessing to a lifelong murder spree.

"A feral cat sends psychic postcards to the family dog he left behind.

"A child abandoned into foster care grows into a very, very hungry man.

"A boy competes with his older brother for the affections of a girl before discovering a mysterious hole in the bottom of a lake.

"An old man reminisces on his career as a disease engineer for a shadowy world organization.

"A teenage girl and her kid brother make their way through a post-apocalyptic Seattle while being pursued by a large, lonely zombie.

"The black hole at the center of our galaxy delivers a fierce and final soliloquy.

"From the author of WARM BODIES, a collection of strange stories about strange people, strange creatures, and strange objects experiencing joys and hungers that are not strange at all."


The Goodreads summary says exactly what you're getting when you read this book of short stories: an eclectic mix of Isaac Marion. When I read them, I felt I could probably put them in order, from what was written first to what was written more recently, judging by the quality of writing. That isn't to say that any of them are bad, but he still has become a better writer since he wrote some of these shorts. The stories all have very different topics, but the majority had a very similar feel... which could be both a good thing in that the author is identifiable by his writing style, or a bad thing because you're expecting a much different story each time.  I loved Warm Bodies, so of course I enjoyed "Grass through the Concrete," but I think my favorites were still "Emails from a Serpent to Various Government Agencies" and "You Were Once a Wolf."  Great stuff, and I'm glad I got a copy of this book.
Posted by Shannon Mawhiney at 5:00 PM 3 comments:

Book Review: Mameshiba on the Loose! 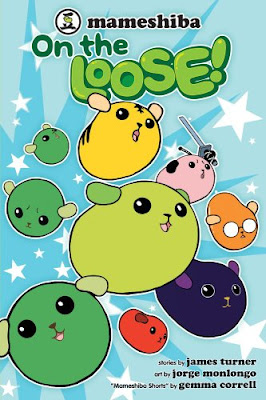 From Amazon: "Meet Mameshiba, the cute little bean dogs with bite! Starring in their first ever adventures, they rescue friends, explore outer space, and offer interesting bits of trivia when you least expect it. Hold on tight--Mameshiba are on the loose!"

This is the second book I've read of the adorable, funny, little Mameshiba, the first being Meet Mameshiba! The diminutive bean dogs are this time on a few adventures, and while both they and the stories are very cute, they just aren't as funny in comic form as they are in the original Japanese commercials.  Part of the problem may be that I've never been that in to comics, but I think the stories here could have been more bizarre and random, like the commercials, and I would've been much more entertained. It's still cute and worth the read, but my hopes were too high.

At some point I'll read the third English book, Mameshiba Love Winter, but I've set the bar of expectation a bit lower now. Ah well.
Posted by Shannon Mawhiney at 5:00 PM No comments: 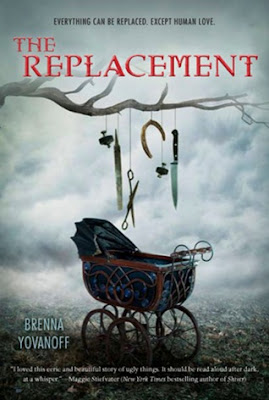 From Amazon: "Mackie Doyle is not one of us. Though he lives in the small town of Gentry, he comes from a world of tunnels and black murky water, a world of living dead girls ruled by a little tattooed princess. He is a Replacement--left in the crib of a human baby sixteen years ago. Now, because of fatal allergies to iron, blood, and consecrated ground, Mackie is fighting to survive in the human world.

"Mackie would give anything to live among us, to practice on his bass or spend time with his crush, Tate. But when Tate's baby sister goes missing, Mackie is drawn irrevocably into the underworld of Gentry, known as Mayhem. He must face the dark creatures of the Slag Heaps and find his rightful place, in our world, or theirs.

"Edward Scissorhands meets The Catcher in the Rye in this wildly imaginative and frighteningly beautiful horror novel about an unusual boy and his search for a place to belong."

Comparing this book to Edward Scissorhands makes it sound like the story might be somewhat humorous, and it's not; and comparing it to Catcher in the Rye is giving it way too much credit.  I enjoyed the general story of this book a lot, with the delicate balance between the underworld-ish-ness and the normal world and a protagonist figuring out which one he belongs to.  And it started out great with such an unassuming main character, already in a position where he's dying and only just now realizing it, as any child with a long-term illness would be: not noticing how bad it is until it gets even a little bit better. And it does get better, and Mackie joins a band, and the descriptions of the feeling he gets on stage, and of the atmosphere in Mayhem, are great. But the characters, even Mackie, never quite felt real; nothing ever felt urgent, even when it certainly should have (and though I'm not opposed to swearing when it fits, the book tries often to make the reader feel urgency by overusing the f-word); and the author seems to sometimes forget about her own characters, which may just be because there were too many. Several times I found myself wondering "where's so-and-so?" because Mackie suddenly wasn't thinking about or noticing them. For example, at one point his family is in danger, and he finds his sister and father but makes no mention of his mother. Mackie very well knows she's at work (as we find out later), but the reader doesn't know this, and it feels weird. He also doesn't ask obvious questions, or explain things to people when he should, which doesn't feel like character quirks so much as plot devices. Mackie's unassuming nature turns into martyrdom a few times too, which didn't seem to fit him, and the ending didn't entirely make sense. (No one's worried about the Cutter anymore...?)

Typos were a small problem too. I could put up with them, and they weren't overwhelming; but there were enough that I definitely noticed, which is disappointing. Sexual moments and swearing also make this a not-appropriate-for-under-high-school book.
Posted by Shannon Mawhiney at 10:33 PM No comments: