Just sharing a link to my "First Book Story" on Cheryl C. Malandrinos' blog, The Professional Writer's Connection!  Check it out and share your thoughts on self-publishing.

Email ThisBlogThis!Share to TwitterShare to FacebookShare to Pinterest
Labels: Interviews, The Death of Torberta Turchin 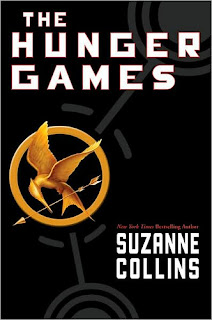 In a future where North America is divided into the Capitol and the 12 districts that serve it, the Hunger Games serve as a reminder to the lower classes that the Capitol can do whatever it wants. It can even steal your children and pit them against each other in a fight to the death for the entertainment of the Capitol's citizenry.

District 12, where the narrator, Katniss, hails from, is a joke to the rest of Panem.  They haven't had a victor in the Hunger Games in many years, and their last victor is now a stumbling drunk (and is to be played by Woody Harrelson in the upcoming movie, which I'm pretty well gleeful about).  But this year she promises her younger sister that she, Katniss, will be the one to survive.  But will her hunting skills be enough to protect her from the other 23 contestants?

I really enjoyed this book.  It's a quick read, mostly because Katniss (or Kat) is a practical girl, and she tells the story as it is, in present-tense as it's happening. She doesn't use a lot of flowery language, and she doesn't do a lot of time sorting through her feelings or being confused (though that's not to say that she never is), or feeling sorry for herself.  She has depth, but it's as if she doesn't realize or care that she does.  That's just the way it is, and she doesn't spend time reflecting on this.  But she has a way of describing everything to a T with as few words as possible, and she does make some very interesting observations, especially about the people of the Capitol.  And her lack of over-emotionality makes her possibly the most normal and maturing teenage girl I've ever read.

For that reason, as well as for the social commentary (of which I hope there is more to come in the following two books), I wish every teenager would read this book.  The dystopian future and the fight for survival are interesting, but, like most YA novels, there are those stirring hormones to deal with.  It's confusing, even alarming, she doesn't know how she really feels about it, and it's normal.  There is no I'll-jump-off-a-cliff-because-you'll-come-save-me-or-if-not-I'd-rather-just-die nonsense.  Because guess what, kids; that's called obsession.  Obsession ≠ love.  Obsession => stalking (and/or losing your soul and mortality, but that's quite literally another story).

This book also would make a very good intro to books that have something to say about current, present-day society but don't flat-out say it.  I remember having to be spoon-fed most of what's in books like Farenheit 451 the first time I read them in school, and I think this book would be a lot easier for kids to "get."
Posted by Shannon Mawhiney at 10:10 PM No comments: