Book Review: How to Tell if Your Cat is Plotting to Kill You by Matthew Inman 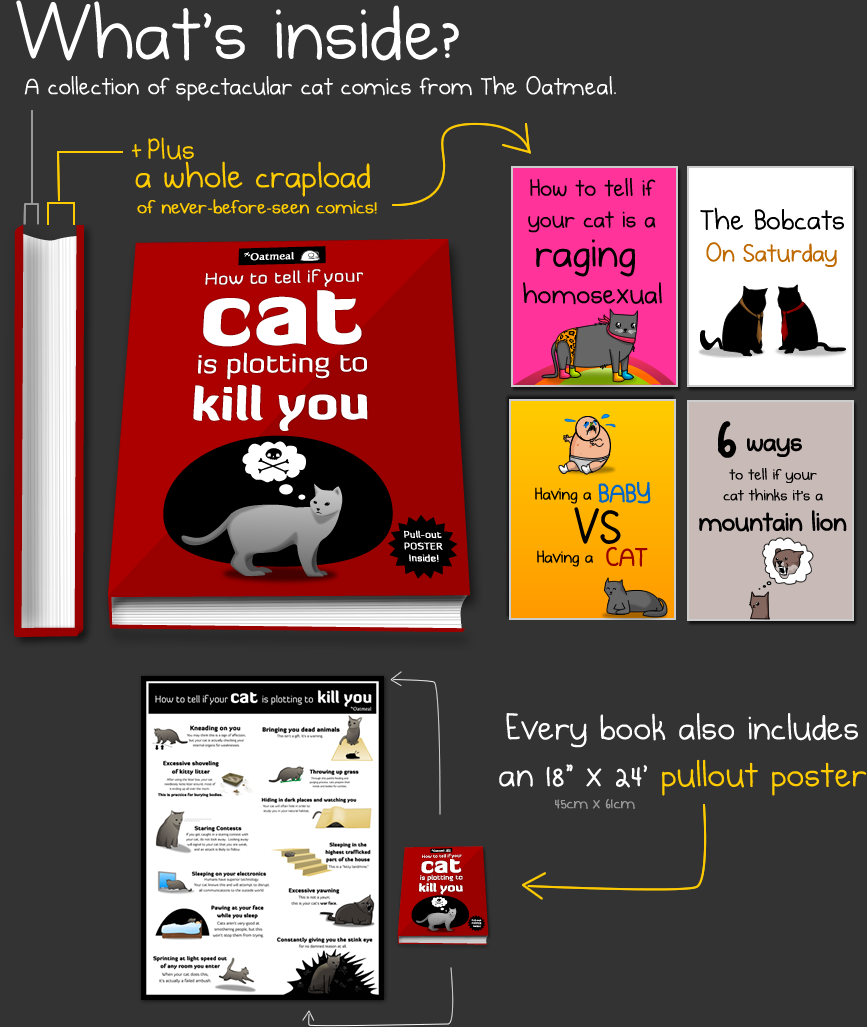 If you're familiar with The Oatmeal (aka Matthew Inman), then you're familiar with this book's style and probably already own or wish you owned this book. Some comics are repeats from his site, but most are new, and all have to do with cats. Cat thoughts, cat plots, cats as office workers, etc.  I actually don't care much for the office worker Bobcats, and there are quite a few pages devoted to them, but I still lol'd at almost this entire book.  It also includes a poster at the end, and I have no idea how you could possibly go wrong getting a book of hilarious cat comics and a poster for under $10.

(Warning though: some bad language, so not for the kids. It's not overdone though and always used for humor's sake. But still, if your kids can read, you might want to hold off on showing them the funny pictures.)
Posted by Shannon Mawhiney at 8:00 PM No comments:

Email ThisBlogThis!Share to TwitterShare to FacebookShare to Pinterest
Labels: Book reviews, How to Tell if Your Cat is Plotting to Kill You, Matthew Inman, Reviews, The Oatmeal 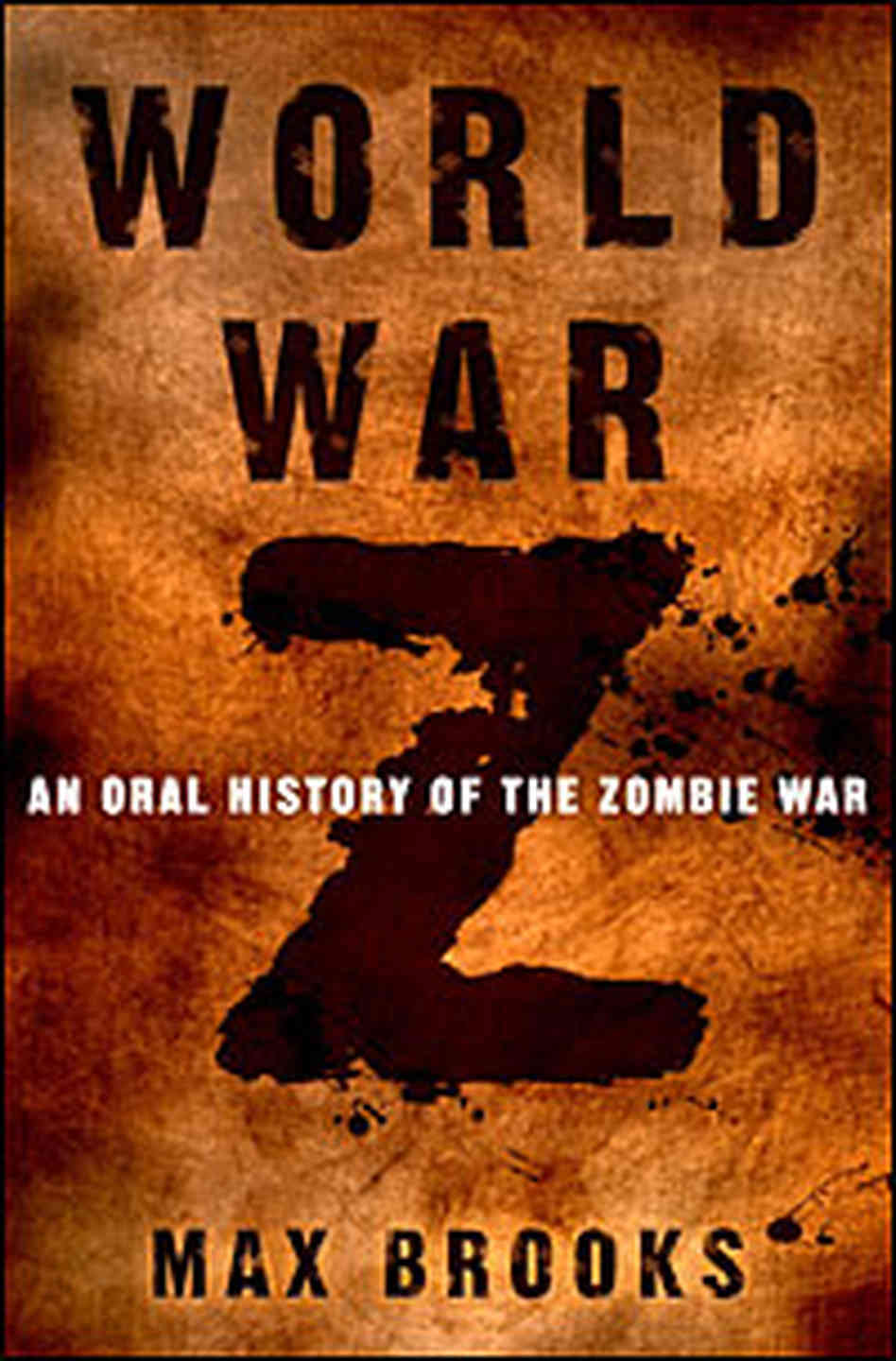 From Amazon: "The Zombie War came unthinkably close to eradicating humanity. Max Brooks, driven by the urgency of preserving the acid-etched first-hand experiences of the survivors from those apocalyptic years, traveled across the United States of America and throughout the world, from decimated cities that once teemed with upwards of thirty million souls to the most remote and inhospitable areas of the planet. He recorded the testimony of men, women, and sometimes children who came face-to-face with the living, or at least the undead, hell of that dreadful time. World War Z is the result. Never before have we had access to a document that so powerfully conveys the depth of fear and horror, and also the ineradicable spirit of resistance, that gripped human society through the plague years."

I haven't read Zombie Survival Guide yet, so, although the Guide is mentioned several times in this book, I can't compare the two.  I can say that this book is very detailed and well thought out, to the point that you almost believe it was really written from eye-witness accounts.  Though it's intended to be transcriptions of oral history interviews, the majority of it reads like it was always intended to be a movie script, or at least more like prose than like real people speaking.  That isn't necessarily a bad thing, but it did keep my disbelief suspended only about a few inches above the pages.  (That being said though, it doesn't look like the movie based on this book is going to follow the book very closely; those movie zombies move dang fast, and Brad Pitt looks like he's in the thick of the action, not an interviewer/author. *shrug*)

A lot of the characters seemed really similar too. This may have been intentional, with everyone having gone through similarly terrible things during the war, but I kind of doubt it.  I can't say that the book was boring for this reason though; the stories and the detail made up for it and kept me interested. I'll probably go back and read the Guide soon.
Posted by Shannon Mawhiney at 11:04 PM No comments:

Book Review: I Am Not a Serial Killer by Dan Wells 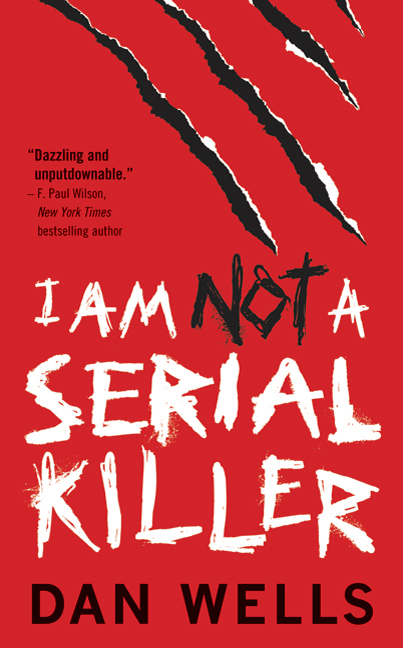 From Amazon: "John Wayne Cleaver is dangerous, and he knows it. Obsessed with serial killers, he never wants to be one. Yet terrible impulses constantly tempt him.

"Having grown up helping his mom at the family mortuary, dead bodies are no big deal to John. He likes them, actually. They don’t ask for the empathy he’s unable to offer. Perhaps that’s what gives him the clarity to recognize that something is frighteningly different about the freshest body on the slab.
For the first time, John must confront a danger outside his own mind, a threat he cannot control, a menace to everything and everyone he would love, if only he could."

Though it was the first book that I've finished in under 2 weeks in a very long time, it could have been so much better. In fact I really wish I didn't have the complaints that I do.

First off, I'm going to spoil something for you because, I believe, it might actually make you like the book more if you decide to read it.  I felt duped when it happened, because it turned out to not be the type of book I thought I was reading.  So....

....this book has a huge supernatural element to it.  That's all I'll say; I won't ruin more than that.  And don't get me wrong, I love supernatural stories.  But I wasn't out to read a supernatural story; I wanted to read about a sociopathic teenager.  Which I still did, and it was mostly well written, incredibly interesting, and very engaging.  But the supernatural bent really got my knickers in a twist when it came out of the blue like that. I was surprised, but not in a good way; it seemed like the author thought we wouldn't read it if we knew it was supernatural, so he just left that out of the blurb.  Or, he thought we'd appreciate the shock.  But again, I just felt tricked.

Once I got past that though, I thought all of the characters were incredibly realistic. The John, his family, his therapist, the villain, everyone.  I love it when an author knows his characters, and this author definitely does.

And the story is usually, though supernatural, believable.  However, there are moments that seem to defy logic.  Without spoiling anything else, I'll say that more people should have been suspicious of the sociopath teenager than were, especially after some of the actions he took.  (How's that for vague?)  It was enough that at moments, I was taken out of the story and giving the pages a look of disbelief.  Which was especially disappointing because the book was otherwise so absorbing.

This book is one of three books in a series (John Cleaver series), but at this point I probably won't read the others.  I may at a later date, but I was irked just enough by this one to kill any eagerness I might've had to immediately read the rest.
Posted by Shannon Mawhiney at 8:09 PM No comments: